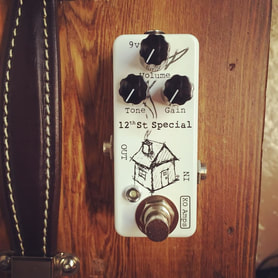 Named after the street I used to live on in Toronto when KO Amps first started.  House graphic is roughly to scale of the size of that tiny house as well.  A no nonsense workhorse overdrive with a traditional voicing to cover as much ground as possible.  I aimed to make this a must have on every pedal board.  Handles low to mid gain tones superbly with a nice mild mid boost.  The tone control is a treble roll off like a rat to tame the highs.  It has a wider tone response than the KOi did, so you can get some bite if needed but with the same smoothness.  Designed in conjunction with Mr. Robert Renman, I modeled it after the Rendrive I made as a one off gift that turned out better than expected.  Runs on a standard 2.1mm boss style 9v power adapter.  Current draw ~7mA.​  ​$150CAD shipped.

Email koamps@gmail.com to order if out of stock.
12th Street Special OD - Red 1590A 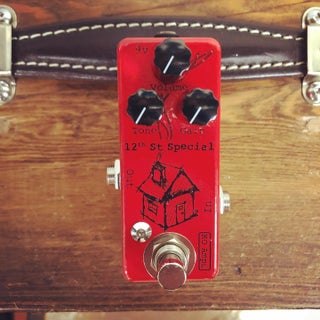 One pedal shipped anywhere in the US or Canada.